Ch. 10
In order to avoid PLAGIARISM, you must provide MLA documentation in your papers. This consists of both PARENTHETICAL REFERENCES and a WORKS CITED list at the end of your paper.

* The basic parenthetical citation consists of the author's last name and a page number BEFORE the final period of a sentence. Example:  (Fielding 213).
* If the author is referred to in the sentence, include only the page number.
Example: According to environmental activist Brian Fielding, the number of species affected is much higher (213).
* When referring to a work by two authors, include both author's names: (Stange and Hogarth 53).
* When citing a work with no listed author (WHICH IS RARE), include a shortened version of the title: ("Small Things" 21).
*When citing a source that is quoted in another source, indicate this by the abbreviation qtd. in.
Example: According to Kevin Kelly, this narrow approach is typical of the "hive mind" (qtd. in Doctorow 168).
* When citing 2 or more works by the same author, include a short title after the author's name.
* We cite prose passages of more than 4 lines differently. You can see an example of this on page 266 of your textbook, but in this class, we will not include LONG QUOTES in our papers. Our papers are all too short for these long quotes.

Poetry or Music (we cite LINE numbers): Blake asks, "What immortal hand or eye / Could frame thy fearful symmetry?" (lines 3-4). http://www.shepherd.edu/scwcweb/hndpoetry.htm
Plays (we cite act #.scene #.line #). If we don't have all of these, we cite at least 2. If we don't have 2, sometimes we substitute line # for page #.
Example: Hamlet famously ponders, "To be or not to be, that is the question" (II.3.27-28).
Adding or Omitting Words in QuotationsIf you add a word or words in a quotation, you should put brackets around the words to indicate that they are not part of the original text.

Jan Harold Brunvand, in an essay on urban legends, states: "some individuals [who retell urban legends] make a point of learning every rumor or tale" (78).If you omit a word or words from a quotation, you should indicate the deleted word or words by using ellipsis marks, which are three periods ( . . . ) preceded and followed by a space. For example:

In an essay on urban legends, Jan Harold Brunvand notes that "some individuals make a point of learning every recent rumor or tale . . . and in a short time a lively exchange of details occurs" (78).

Sample Works Cited Page: http://owl.english.purdue.edu/owl/resource/747/12/
Works Cited List:
* Should begin on a new page.
* Header Works Cited should be centered.
* Double space your list, and list entries alphabetically by the author's last name.
* Each entry should begin at the left-hand margin, and the other lines in the same entry should be indented 5 spaces. This is called a hanging indent.
* Italicize all books and periodical titles.
* Use a short version oaf a publisher's name (Penguin rather than Penguin Books), and abbreviate University Press (UP).
* When listing more than one work by an author, include the author's name in the first entry, and substitute 3 unspaced hyphens followed by a period for the 2nd subsequent entries.
* Put " " around the title of an article or a section of a book, and provide the page numbers: 44-99 or 121-37.
* Include the medium of publication- print, Web, CD, etc. for ALL entries.
* Make sure everything in your Works Cited is cited somewhere in the paper.

Examples of how to cite various sources begins on page 267 of your textbook. Here are a few examples:
Podcast:
Glass, Ira. "Scenes from a Recession." This American Life. Chicago Public Radio, 27 March 2009. Web. 10 January 2012. 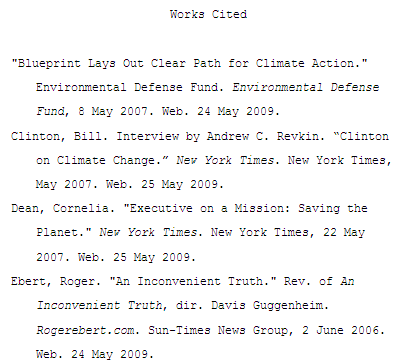 If there is time, go over Chapter 11, Plagiarism.

We will most often deal with QUOTING.

To avoid repeating phrases like he says in identifying tags (phrase that introduces the quotations), try using some of these:
notes, acknowledges, proposes, suggests, asks, observes, comments, reports, concludes, etc.  (page 259)
It is always easiest to put these tags at the beginning of a sentence.
Blending Quotations With Commentary

Quotations should be blended into your text to prevent awkward transitions and confusion. Avoid "hanging quotations" that are not linked to your writing.

There are various ways to punctuate quotations, depending on their placement in the sentence, their purpose, and the purpose of the sentence. The key is to be consistent with your punctuation. This page highlights rules and examples that should help you when punctuating quotations within your papers. Click on the punctuation that most closely matches your situation.

Go to the top of the page.Single Quotation Marks

Go to the top of the page.Block Quotations

Go to the top of the page.Comma/Period

Go to the top of the page.Colon/Semicolon

Go to the top of the page.EllipsesThe ellipses, three spaced dots ( . . . ), indicates that part of a quotation has been left out. Ellipses are useful when you want to include only the most relevant words of a quotation; however, any omission must not distort the quotation's original meaning.

Go to the top of the page.Slash Mark

Go to the top of the page.Exclamation Point/Question Mark

Aspects of Writing to Focus On [These are the errors I observed most frequently in the "Allegory" response papers]:

2. Narrative Mode in Essay Writing:
1st person perspective: "I"
This perspective is acceptable for various types of essay writing, most notably the personal narrative or personal response (when you are being asked to defend an opinion and are using personal examples as one of your means of evidence) . "I" is less formal, though, so when you are asked to write a formal response, 3rd person is the appropriate perspective to use.

2nd person perspective: "You"
This is rarely used in essay writing. In fact, my advice would be to avoid it altogether. It is the most tricky perspective to "pull off". Readers do not like to be "preached to," and often times, when a writer says "you," he or she really means "I" or "one".

4. ELLIPSES
EllipsesThe ellipses, three spaced dots ( . . . ), indicates that part of a quotation has been left out. Ellipses are useful when you want to include only the most relevant words of a quotation; however, any omission must not distort the quotation's original meaning.* For omissions in the middle of a sentence, use an ellipses.Example: The character of Sammy was soft-spoken, but he believed strongly in "respect for women, love of country . . . and a bright, sunny day" (87).For omissions at the end of a sentence, use an ellipses followed by a period.Example: According to Zephron Cochran, "Warp drive is a creation that will change multitudes of lives . . . ."If a parenthetical citation follows an omission at the end of a sentence, place the period after the final parenthesis.Example: Of the many fruits available, Abraham Lincoln thought "apples to be the most nutritious . . . " (47).Omissions immediately following an introductory statement do not need an ellipses.Example: In Harris' book, one-to-one conferences are "one of the most important aspect of teaching" (2).5. Semi-Colons:The rule for when to use a semi-colon is very simple-- it is used to separate two independent clauses (complete sentences) that you wish to link together to form a compound sentence. Examples:We must emerge from the dark cave; we must search for the light.[When two independent clauses are joined together without a conjunction, a semi-colon is needed.]
We must emerge from the dark cave, and we must search for the light.[When two independent clauses are joined together with a conjunction, a comma is placed before the conjunction.]Plato shows us the importance of enlightenment; furthermore, he challenges us to put our enlightenment to good use.[When two independent clauses are linked with a transitional phrase or conjunctive adverb [list here: http://en.wikipedia.org/wiki/Conjunctive_adverb ], you need a semi-colon and then a comma.