"The Allegory of the Cave:" Response Paper Assignment

Homework for Friday 25 January: Read Plato's "The Allegory of the Cave" on page 657 of your textbook. If you don't have the textbook yet, you can find the reading online! The homework is listed below.
This is an allegory used by theGreek philosopher Plato in his work The Republic to illustrate "our nature in its education and want of education"  Plato lets Socrates describe a group of people who have lived chained to the wall of a cave all of their lives, facing a blank wall. The people watch shadows projected on the wall by things passing in front of a fire behind them, and begin to ascribe forms to these shadows. According to Plato's Socrates, the shadows are as close as the prisoners get to viewing reality. He then explains how the philosopher is like a prisoner who is freed from the cave and comes to understand that the shadows on the wall do not make up reality at all, as he can perceive the true form of reality rather than the mere shadows seen by the prisoners.The Allegory is related to Plato's Theory of Forms, according to which the "Forms" (or "Ideas"), and not the material world of change known to us through sensation, possess the highest and most fundamental kind of reality. Only knowledge of the Forms constitutes real knowledge.[1] In addition, the Allegory of the Cave is an attempt to explain the philosopher's place in society: to attempt to enlighten the "prisoners".

ASSIGNMENT-- Response Paper:  Turn to page 657 in your textbook and read Plato's "The Allegory of the Cave". For the visual response portion of this entry, draw what you think the cave would look like, and place yourself in the image; where would you be in regards to the cave? For the written portion, explain how the allegory relates to your experience right now as a college student seeking enlightenment. Your response should be approximately 2 typed pages, double-spaced, in MLA format.

Your response should be typed. It should contain a proper MLA heading and a creative, centered title. The response should be at least 4 paragraphs in length but no longer than 5: Introduction that contains a lead-in and introduces the prompt, body paragraphs that directly answer the prompt with details and examples, and a conclusion that wraps up your discussion. I am using this assignment to gage your  knowledge of format, grammar, and essay content. It will show me what we need to focus on this semester. Please keep in mind principles of grammar and mechanics, and strictly adhere to MLA format. Your best work is expected. There's only ONE chance for a FIRST impression.

"I am wiser because I know that I do not know." -Socrates


Questions:
What is the cave a metaphor for?
How about the light?
What "encaves" us?
How do we "escape"?
Why should we?

Plato’s Allegory of the Cave
What is an allegory?
A kind of story in which what happens is being compared to something else that is similar and unstated.
What do you think the Allegory of the Cave is being compared with?
I asked you to view the reading from the perspective of a student beginning a path to enlightenment via a college education. On a bigger level, it can be read as a commentary on society-- how our government and institutions (parental, religious, educational, work, etc.) create a facade for us live behind. So long as we buy into the reality of the facade, "they" can remain in control over "us". Plato felt that the study of Philosophy was the key to escaping the facade; Rhetoric and Philosophy are closely related disciplines.
In regards to education, particularly within the Humanities, it is important that educators view their job as Yeats did: "Not the filling of a bucket but the lighting of a fire." And as Socrates intended: An exploration of truth and knowledge.
Would you want to be released from the cave? Why or why not?
Consider the pros and cons. Plato reminds us that we can't all be "fully enlightened"-- we can't all be Philosopher. For if we were, the world would cease to function as we know it. Whatever our "path" is, we must master it. It is our duty to share our mastery, to function in our chosen role, to contribute to society the best way we can.
What is like the cave in our world?

Is there anything that you know for absolute certain to be true?
**Personal truths.

Comparative Analysis:
"Based on Plato’s allegory. In the film, the humans trapped in the Matrix are like the people in the cave. They see only what the machines want them to see, but they believe they see reality as it really is. They accept what their senses tell them as all that exists. Neo suspects that this is all a lie, but he’s not sure how the Matrix works. Morpheus, who runs the resistance to the Matrix, brings Neo into the Resistance, believing that Neo is the person who has been foreseen by the Oracle to be able to defeat the Matrix. "Morpheous to Neo: “The truth is that you are a slave Neo, like everyone else you have been born into bondage. Into a prison that you cannot smell or taste or touch.”   [Prisons of the Mind]"The first stage to enlightenment in the Allegory starts when a prisoner is liberated and forced to stand and move causing him suffer sharp pains. In the Matrix this stage is presented when Neo woke up after being released from the Matrix. He winced as if in pain, this is precisely what Plato referred to in the first stage. The reason for the pain was muscle atrophy; he had never used his muscles so they caused him pain. Being chained so he could not move, the prisoner is very similar to Neo who in reality was grown in a small pod and could not move. The released prisoner and Neo both experienced the same pain because neither of them had moved before." [Neo can't see when he first opens his eyes; he is "blinded" by the light.]

Neo asks, “Why do my eyes hurt?” to which Morpheus replies, “You never used them before.”
Because prior to being released, Neo lived in a dream world and since being released was in true reality. Also because being grown and kept in the pods the machines rule, Neo had never even opened his eyes, literally, until being released. The released prisoner in the allegory experiences pain in his eyes for a similar reason, he had been in the dark for his entire life and the light is painful to experience for the first time. As Plato’s allegory continues so does Neo’s journey to enlightenment.

"He will be able to see the sun, and not mere reflections of him in the water, but he will see him in his own proper place, and not in another; and he will contemplate him as he is.” -Allegory    This is represented in the movie when Neo realizes he is "The One". He accepts his place, now enlightened of what that place is.
"After the allegory of the cave Plato explains the importance of the enlightened to share their knowledge with the ignorant, rather than keep the information to use towards evil. At the end of the movie, it alludes that Neo will do exactly what Plato insists and attempt to share his knowledge. The final scene of the movie is Neo talking into a phone, talking to the machines. His final words in the movie were “I know you’re out there. I can feel you now. I know you’re afraid. I’m going to show these people what you don’t want them to see. I’m going to show them a world without you. A world without rules and controls, without borders or boundaries, a world where anything is possible.” These words indicate that Neo will attempt to free people from the Matrix by enlightening them, which is exactly what Plato’s allegory asserted was important to society."**This is comparable to the job of a Professor of the Humanities. It is our job to offer knowledge and not "turn on the light" for our students but rather remind them that it is out there and that they should never cease to seek it.
Have you ever heard the saying "innocence is bliss?" Do we care about certain things independent of the experiences they create for us? For example, is being in reality important even if the experience isn’t pleasant? Is it better to live happily in the Matrix/Cave than miserably in reality? Why or why not?  ... Is it better to know and be bothered by the knowledge or to not know at all?


--Quoted sections are from Alea Walstrom via "Educated Topics"
Enlightenment is more than being presented with information. To obtain enlightenment, you must be receptive to receiving the information and committing to the challenge of a higher level of understanding. This is not easy... the path to enlightenment is not the easiest one.

Do you want the red pill or the blue pill? Do you want to remain comfortable, or can you handle the discomfort that comes with enlightenment? Will you bite the apple or reject it-- out of boredom, ignorance, laziness, rebellion? Will you stick out this journey as long as it takes... will a diploma be your ticket out of the cave? The decision is all yours. 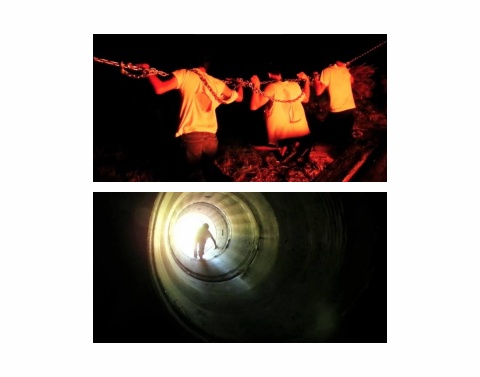